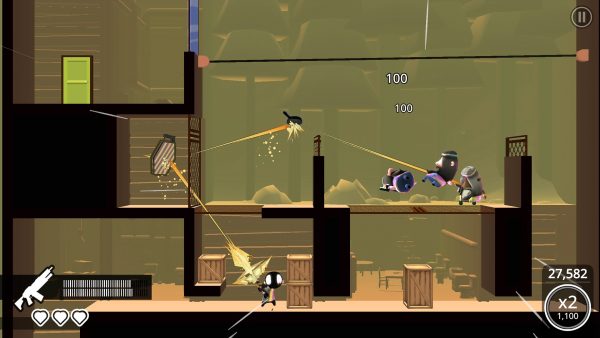 Devolver Digital and Deadtoast have announced that a free-to-play spin-off from the chaotic shoot-’em-up game My Friend Pedro, called My Friend Pedro: Ripe for Revenge, is coming in August for iOS and Android.

“They kidnapped his wife and kids and left him for dead. But it’s going to take more than that to split this banana’s family. Help your friend Pedro serve some ice cold revenge, with a sprinkle of bullets on top!” says a blurb from the game’s press release, which announces that the game will be coming to mobile platforms on August 5.

“Flip and fire your way through dozens of action packed levels on foot, on a motorcycle, and even on a skateboard. Plan your high caliber choreography for the best scores and, if your skin is tough enough, test your skills in Blood Rush mode.”

Take a look at the debut trailer below.

Pre-registration for the game is available now.

The original game, it’s safe to say, was a resounding success: My Friend Pedro shifted 250,000 units in one week on PC and Switch.

The side-scroller is “a violent ballet about friendship, imagination,” and one man’s struggle to “obliterate anyone in his path at the behest of a sentient banana.” The follow-up seems to rely on all the same tricks, but in a more streamlined way that’ll work well on mobile platforms.

If you’re hungry for more banana-based content, you will be pleased to know that the creator of John Wick wants to adapt indie hit My Friend Pedro for television.

The post My Friend Pedro: Ripe for Revenge coming to iOS and Android in August appeared first on VG247.