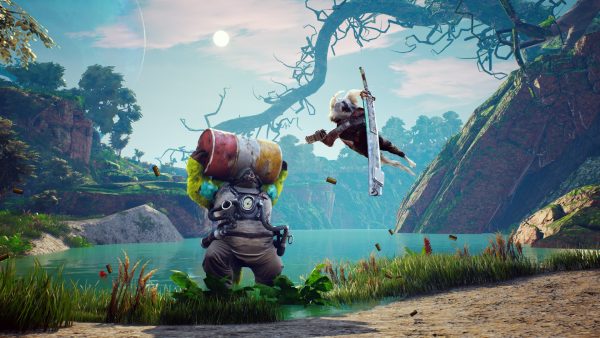 A patch has been issued for Biomutant on PC, and it fixes crashes with AMD-based CPUs among other issues.

The Biomutant patch will roll out on PC first and then consoles as soon as possible due to the submission process. Experiment 101 will announce when the patch is available for consoles.

This is a rather large patch and also includes the promised dialogue pacing, reduces the amount of “gibberish” spoken before the Narrator starts translating, addresses general difficulty, and fixes the Depth of Field toggle not being applied in dialogues.

For more on Biomutant, check out our guides for picking the best class and breed, finding the best weapon, and our tutroial on how crafting works. You can also check out our review where Tom and Dorrani discuss their impressions.

Full patch notes for 1.4 on PC are below.

In order to improve the pacing of the early parts of the game, we’ve edited dialogues to be shorter. We’ve also added more enemies and loot to these areas to better represent the experience later in the game.

● Reduced the amount of gibberish spoken before the Narrator starts translating.
● Added dialogue setting toggles for “Gibberish” and “Narrator” allowing players to select if they want to hear the narrator, the gibberish or both when talking to NPCs.
● Fixed narration and gibberish playing silently and producing an awkward pause when each corresponding volume setting is set to 0 instead of skipping the sound entirely.
● Removed the text delay animation when either gibberish or narration is disabled.

● Opened up all class perks for NG+ games. When starting an NG+ game, the player will now be able to unlock perks from all classes.

● Added Motion Blur slider to the settings.
● Fixed so the camera setting “Auto Adjust > Player” also applies for combat, if turned off the camera will no longer try to frame enemies while in combat.
● Fix Depth of Field toggle not being applied in dialogues

● Increased chances that items found have a level requirements closer to the player’s actual level when found. Players will still be able to find items with higher-level requirements, but player level is now taken into account.
● Removed Common item loot drops from high-level loot crates.
● Reduced the amount of healing items that the player will find from crates and defeated enemies.
● Increased base damage from melee bodies, handles, and addons by approximately 5%.
● Reduced base damage from ranged bodies, muzzles, and grips by approximately 5%.
● Fixed resistance stats not being applied for crafted gear when adding add-ons.
● Reduced gear addon resistance and critical chance bonuses.
● Ensured that quest reward “Diver’s Helmet” will no longer drop as random loot.
● Removed slots from all protective suits.

● Fixed issue with abnormally high damage output due to consumable top mod applying meta damage multiple times during equip and unequip.
● Fixed ability damage not being able to inflict critical hits.
● Reduced Dead-Eye Sharpshooter perk damage multiplier from 2.0 to 1.25 to ensure that it is comparable to other perks.
● Disabled end-of-combat slow-motion camera for short combat scenarios.
● Adjusted valid angles for combat targets to reduce camera movement in combat.
● Disabled camera look-at when striking characters up in the air.
● Fixed a few cases where airstriking would not complete its last attack.
● Adjusted speed of some enemy grabs. It is now a bit easier to dodge them in time.
● Fixed kick attack from smaller enemies being too difficult to parry. Parry window is now more consistent and enemies can be staggered out of it.
● All Tribe Sifus and Lupa Lupin in the final encounter now react stronger to being parried, allowing players to parry and then counterattack.
● Fixed issues with tracking on Jagni Staff attacks. First three hits will no longer overshoot targets and dodge attack is more reliable.
● Fixed sometimes spawning double death particle effects on defeated enemies.
● Fixed issue with Pichu Nanchuk not stopping its animation.
● Fixed larger enemies with melee weapons animating too quickly at slow walking speeds.
● Adjusted hit reactions for Morks to make melee more viable and satisfying to use.
● Fixed issue with dodge shooting while reloading not moving the character correctly.
● Fixed issue with Airstrike sometimes being canceled.
● Adjusted the range for melee attacks to improve enemy tracking and reduce misses.
● Fixed issue where melee gap closer would sometimes overshoot.
● Fixed backwards attack for crush weapons resulting in a miss most of the time.
● Adjusted animations for unarmed and glove attacks to be faster.
● Fixed issue where the player would sometimes become stuck underneath larger enemies after being knocked to the ground.
● Added ability to slide underneath legs of titans.
● Fixed issue where the player would sometimes get stuck inside an enemy after a vault or legslide move.
● Fixed issue where the player would sometimes get stuck inside an enemy after Airstrike.
● Adjusted sound and rumble effect for successful parry to improve feedback.
● Fixed issue where Airstrike would cause enemies to be launched very far.
● Improved aiming for Jumbo Puff when throwing rocks.

● Fixed game progress not being able to reach 100% due to unavailable quest states within a single playthrough.
● Fixed “Back to the Roots” quest sometimes not being completed.
● Adjusted tribe war flow to be more robust.
● Fixed the “Old World Gadgets” trophy correctly unlocking after finding old-world gadgets.
Crash Fixes
● Fixed crash when moving objects between areas using Telekinesis.

● New weapon Wung-Fu is now only unlocked when the player has crafted a new weapon instead of being unlocked when looting an individual component.
● Added correct “fast travel locked” message when attempting to fast travel while climbing a ladder or falling.
● Added Mercenary DLC indicator to the main menu.
● Added dark backdrop to QTE prompts to improve readability on lighter backgrounds.
● Moved Comic-book Effects to ensure that the counter QTE prompt is visible.
● Reversed Hypoxia Warning percent value to be consistent with other zones.
● Added fading to enemy & friendly markers at 30m distance to reduce HUD clutter.

● Disabled fast travel when jumping from water.
● Fixed issue where the “Unspeakable hand” Wung-Fu could cause NPCs to fall through water surfaces instead of drowning.
● Fixed issue with rocket NPC being stuck in air after explosion.
● Fixed issue with rocket NPC explosion particle effects popping when being removed.
● Adjusted free-fall duration needed for Mounts to trigger hard landing.
● Fixed attribute check labels in puzzles incorrectly being displayed as “Loot Chance” instead of “Intellect”.
● Fixed infinite jump while using photo mode.
● Fixed fireflies not spamming narration when caught.
● Fixed child memories being auto-completed when opening photo mode.
● Fixed some doors opening after using photo mode.
● Fixed smoke from burning villages sometimes being rendered as stripes on AMD GPU’s.
● Adjusted default camera pitch up a bit so it’s not positioned directly behind the player
● Fixed resistance being reset after modifying appearance.