In the late ’90s, a certain kind of title came to dominate board gaming. Typified by classics like Catan and Carcassonne they were easy to learn and offered with a great balance of strategy, randomness, and player interaction. As time went on, the former came to dominate the latter two and games were heavier and dryer.

Furnace is very much a return to that older paradigm, and for many players it’s a welcome return. Casting players as businessmen during the industrial revolution, you’ll need to buy businesses that create a supply chain from which you can make the most profit. And like a lot of games of this ilk, it’s a whole lot more fun than it might sound.

Box and What’s Inside 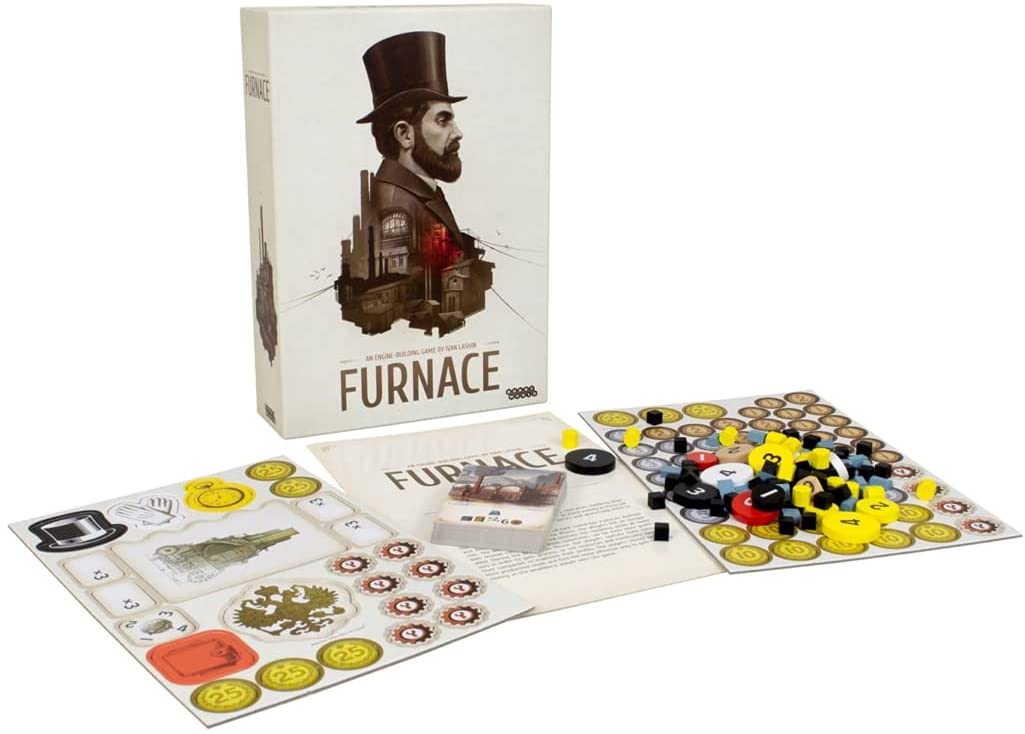 Strictly speaking, Furnace is a card game because it has no board. Instead, the box contains some cardboard tokens, wood pieces to represent oil, coal and iron, four wooden discs for each player, and some decks of cards. The art is great across all the components, echoing the technical illustrations of the era in which it is set. It also has a novel turn tracker that mimics a turning gear.

What’s not so great is the card quality. They’re of very thin stock which will wear quickly, with an annoying texture that makes them stick to each other but not the table or your fingers. They’re a pain to handle but the issue is easily solved with some cheap card sleeves.

Rules and How to Play 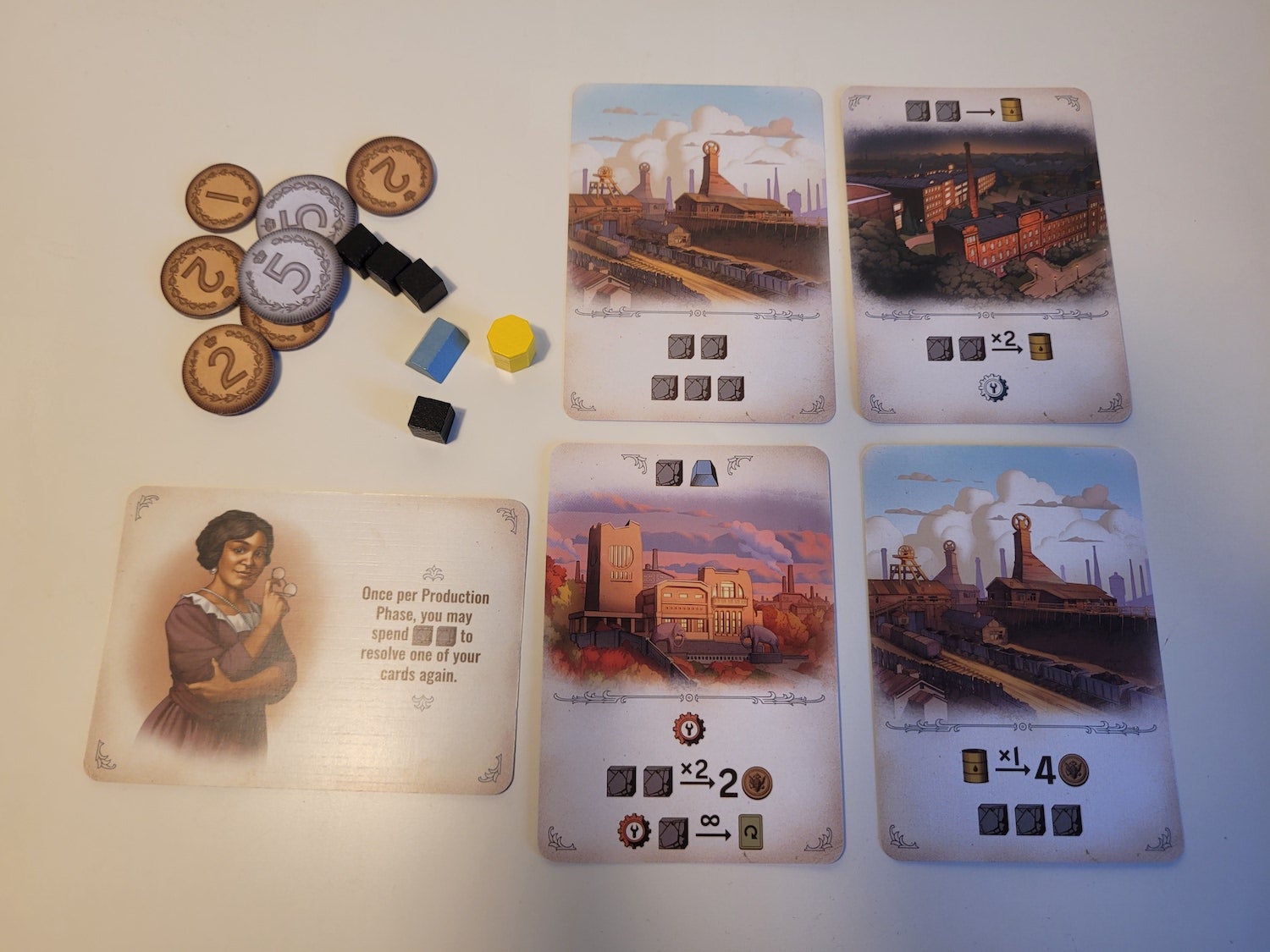 There are four turns in a game of Furnace, each divided into two phases. In the first, some business cards are dealt off the deck and players compete in an auction to win them. In the second you can activate businesses you own one at a time to gain or exchange resources.

Auctions were another popular feature of late ‘90s games, but this one has a clever modern twist. Each player gets four tokens of increasing value and they use them to indicate their bids. The catch is that in Furnace, if you lose an auction you get compensated, either with raw materials or the chance to exchange some for a different type. You can claim this compensation as many times as your bid token. Often, that makes it more valuable to lose an auction than to win it.

The art is great across all the components, echoing the technical illustrations of the era.

This makes the auction phase a relentless and ever-shifting cauldron of competing priorities. Let’s say you want to win a business that can turn coal into cash, which serves as victory points. You can bid high on that, but to make use of it, you’ll also need coal that turn. So you bid low on a business with coal as compensation. But the other players can see this. They may purposefully outbid you on the cash business while leaving your low bid to win the other card, denying you the compensation.

Of course, while it’s tempting to use your bids to screw up other players’ plans, you also need to get your own supply chain running. So it’s a constant multi-way balancing act trying to win what you need while also getting the necessary compensation and putting a spanner in other players’ works at the same time. It’s high stakes too: with only four rounds, you need to take every opportunity to make money or you’ll fall behind fast. 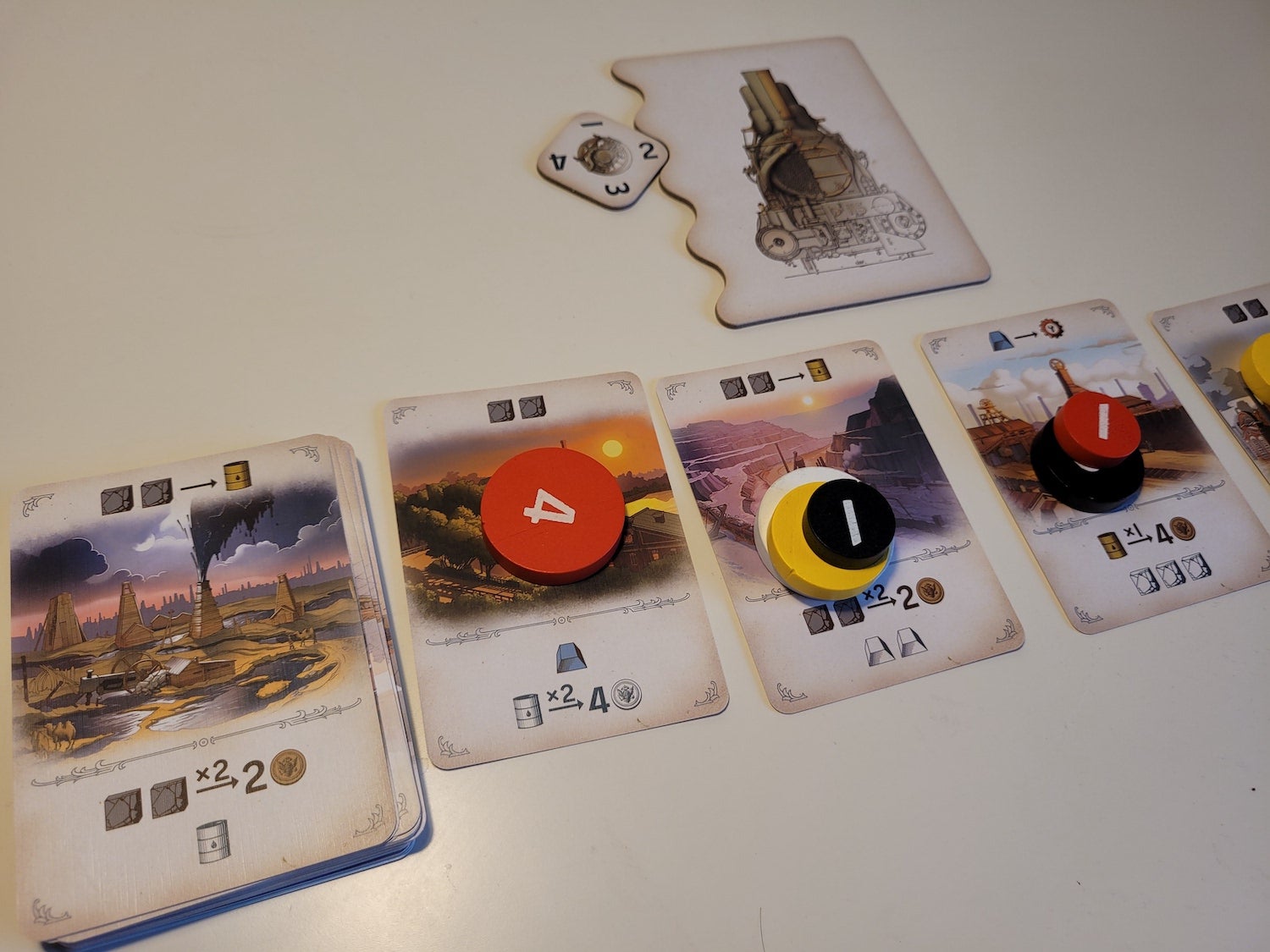 While absorbing and challenging, this dance also has a weakness. A good auction game needs a good tempo, with bids coming in to increase the excitement. But here, players need to bid with great consideration and care, especially in the first two rounds. Waiting while someone lines up the strategies in their head can be a bit frustrating.

In addition to the three core resources, coal, iron, and oil, there’s a fourth more abstract quantity — upgrade tokens. A few cards let you exchange these for money, but for the most part you want to spend them to upgrade your businesses. Each has two effects: one that you can use after purchase and a second that you can also activate when it’s upgraded. To upgrade, you’ll need to spend resources along with the token, making timing your upgrades critical. 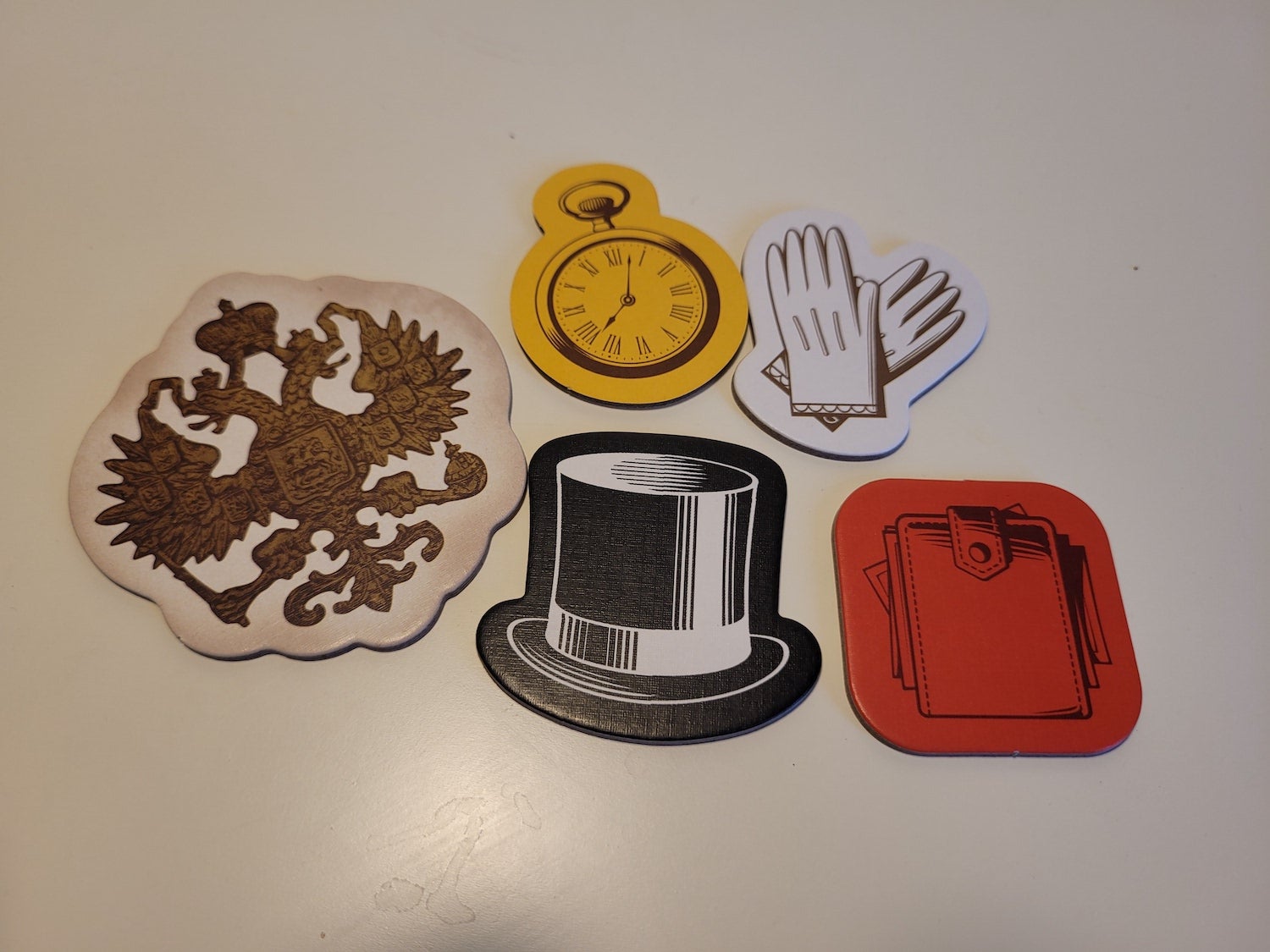 As the game goes on, your ultimate goal is to create a chain of cards that lets you maximize your point-scoring. A business that produces coal, another that lets you exchange coal for oil and a third that can cash in oil – the most valuable resource – for money. Just having such a chain isn’t enough, as exchange effects can only be activated a limited number of times per round. You need a balance, to ensure as many points as possible each turn.

Making this work is the core of the second phase. While not as engaging as the auction, it’s a neat little puzzle in itself. Upgraded businesses have to have their effects in order, without another activation in between so the right order can take some working out. All the more so as the game goes on and your chains become more complex and interdependent. It is a heads-down activity though, with no input from other players. That speeds up the game, with players able to do it simultaneously, although that leaves room for individuals to make rules errors.

Furnace makes those simple rules and three resources work as hard as they can. At the start, each player gets a capitalist card with a special power and a unique starting business. Between them, they provide a variety of guide rails for how you’ll begin building your supply chain. The business cards then offer decent diversity between compensation, resource and exchange effects but the combinations begin to feel thin after a while. 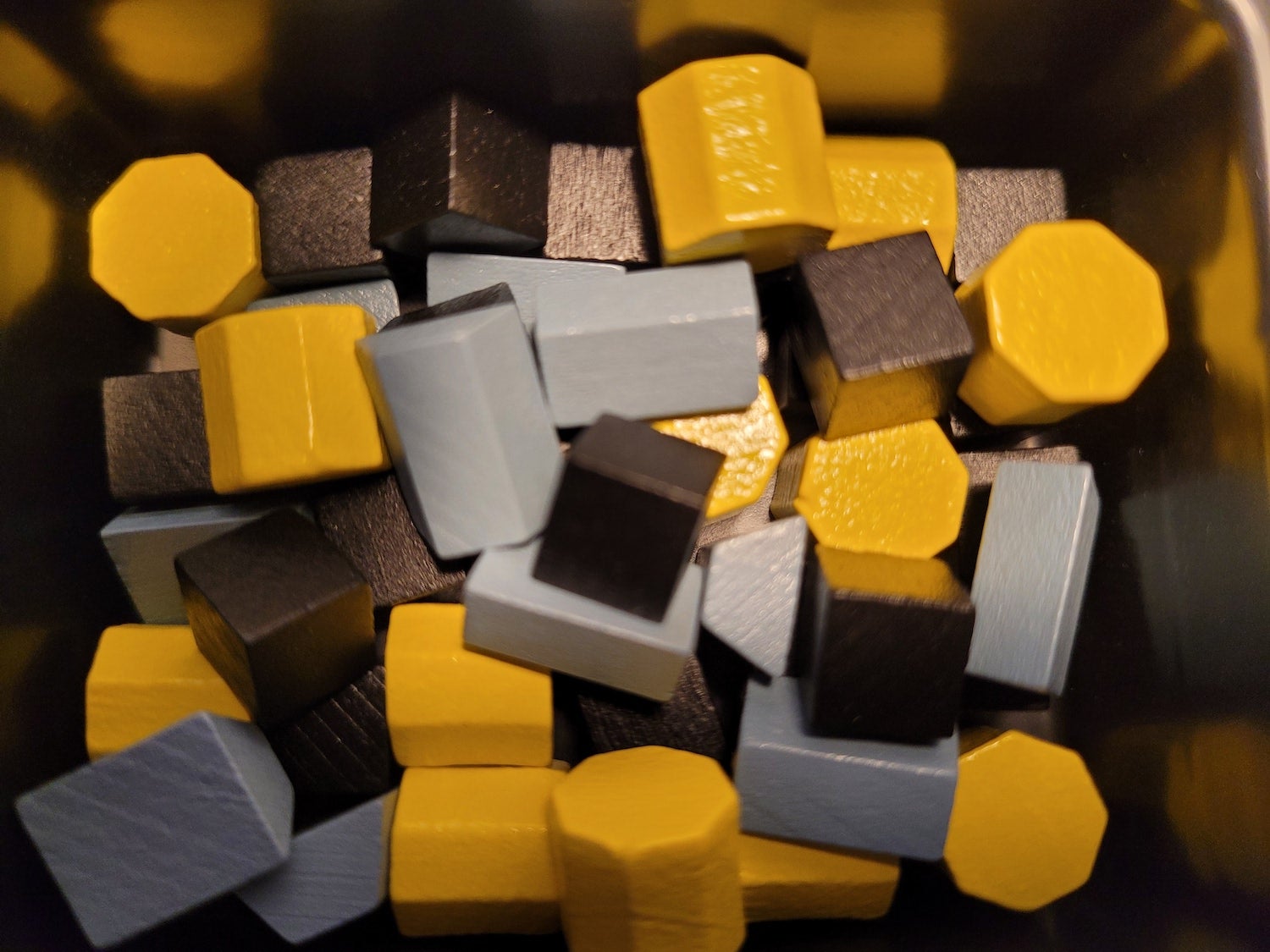