Elden Ring is set to release for PS5, PS4, Xbox Series X|S, Xbox One, and PC on February 25, 2022. Anyone who buys the PS4 or Xbox One version will get a free next-gen upgrade as well, which is always nice to see. Elden Ring is the next game from the makers of tough-but-satisfying action RPGs like Dark Souls, Bloodborne, and Sekiro: Shadows Die Twice.

The game comes in a standard edition as well as a cool-looking collector's edition, and it's available for preorder now. Read on to see what comes in each edition and where you can lock in your Elden Ring preorder. 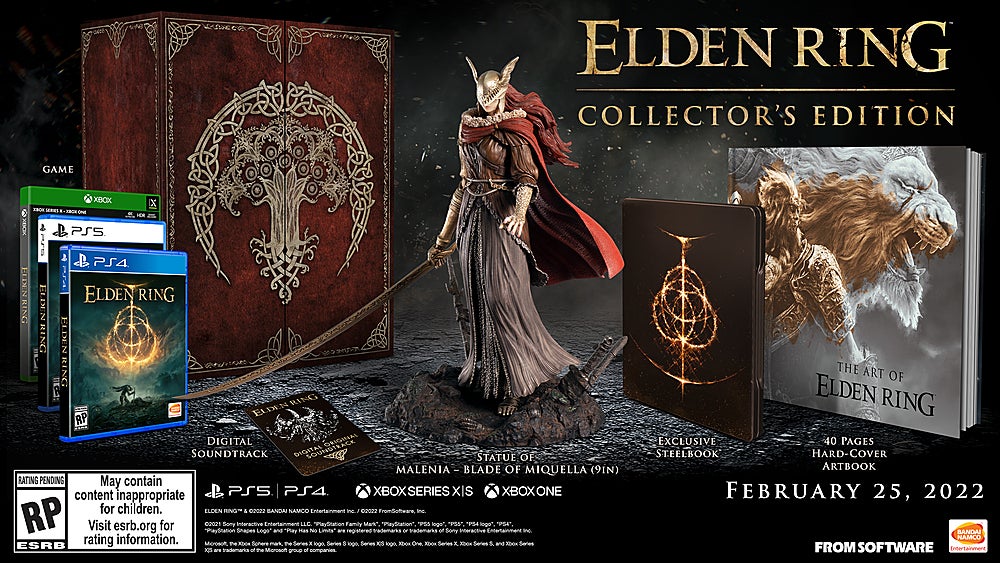 Preorder the collector's edition of Elden Ring, and you'll receive the game itself along with the following items:

As for right now, the standard edition is the only one available. There are no separate editions (yet?) for PS5 and Xbox Series X, but we have confirmed that the PS5 and Xbox Series X upgrades will be free for anyone who owns the previous-gen version. When that changes, we'll update the info above. Still, you can preorder it at the retailers above.

Preorder Elden Ring in the UK

What is Elden Ring?

Elden Ring is an action-RPG that represents a confluence of fandoms. On one hand, you have From Software's Hidetaka Miyazaki, the creator of the exceptional, brooding games mentioned above. On the other, you have George R.R. Martin, the mind that brought you Game of Thrones, helping build out the story.

As for the game itself, it's an action RPG that doesn't look like it will stray far from the gameplay popularized in the Dark Souls franchise. You can expect super-precise combat controls and towering bosses to take down. These games are certainly challenging, but if you keep trying, you'll likely learn the enemies' moves and improve your skills enough to succeed.

As for the story? From Software's games have never been very forthcoming with their stories, even within the games themselves. Bandai Namco released an Elden Ring plot summary, but it doesn't help all that much, either. As far as I can tell, a bunch of demigods each have a piece of the powerful Elden Ring. Your job is to relieve them of these pieces in order to put the ring back together.

Elden Ring Will Have a Free Next-Gen Upgrade

Anyone who buys Elden Ring for PS4 will be able to upgrade to the PS5 version for free. The same goes for Xbox: buy it for Xbox One, and you'll get a free upgrade to the Xbox Series X or Series S version. That's something of a relief, as many games don't offer a free upgrade path, and many PS5/Series X|S games cost $69.99 instead of $59.99.