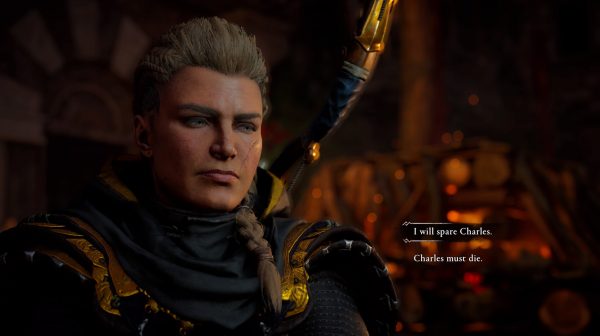 At the climax of the Assassin’s Creed Valhalla Siege of Paris DLC, Eivor must decide the future of Francia.

With Charles the Fat isolated from his family and advisors, this is the most opportune time to install Count Odo on the throne. Or, in a more curious turn of events, do you think that Charles can be redeemed?

Here’s what happens if you choose each path, so you can pick the best ending for your playthrough.

After the events in the castle courtyard at Richardis’ trial by fire, Eivor will go to confront Charles in the palace interior.

To get to him, in the area you find yourself in, use your Odin’s Sight to look over to the left and get the two keys.

One is in the kitchen on the first floor. 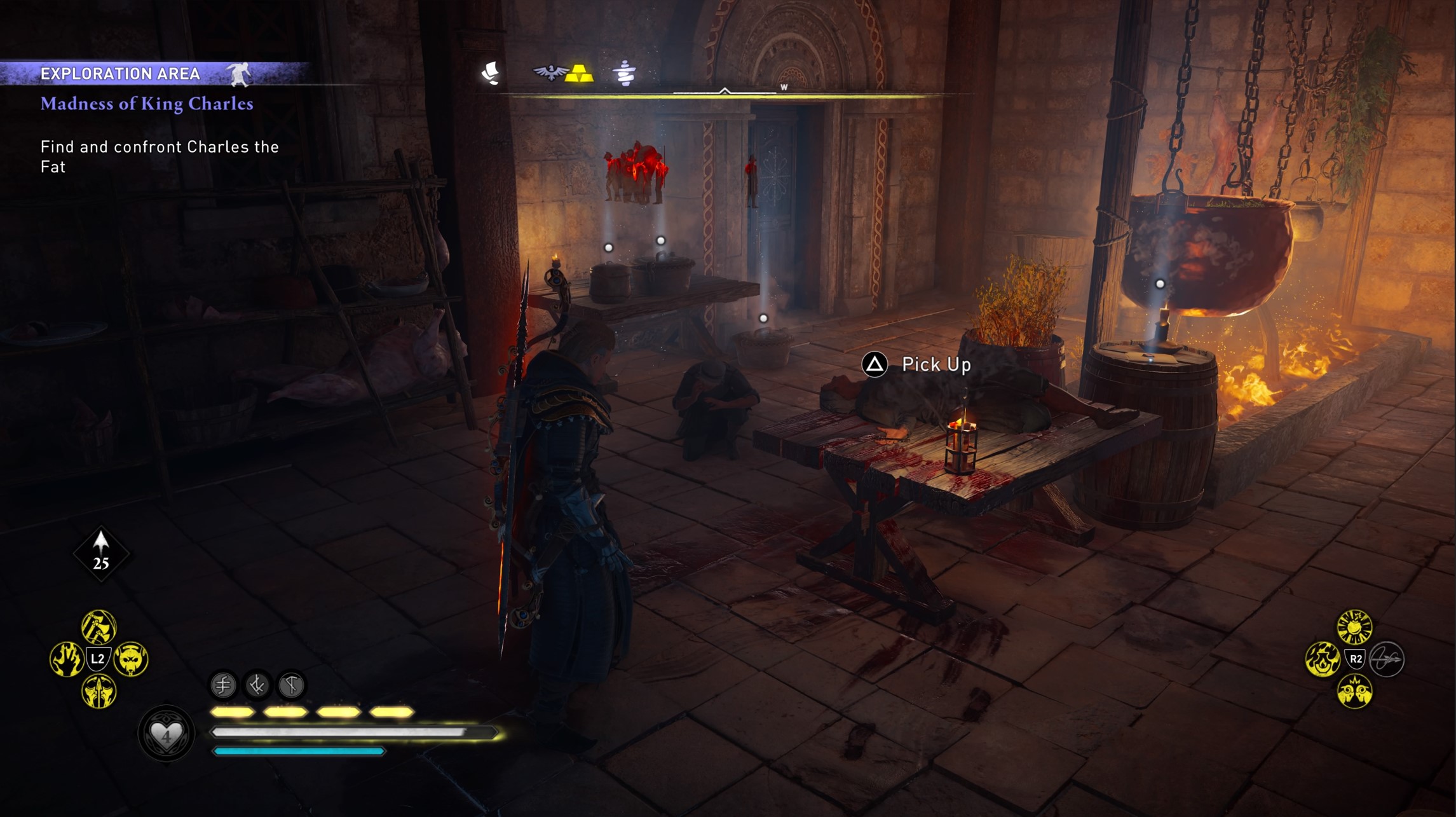 Then you grab another from the second floor after breaking the wooden wall behind the door with an arrow and moving the shelf. 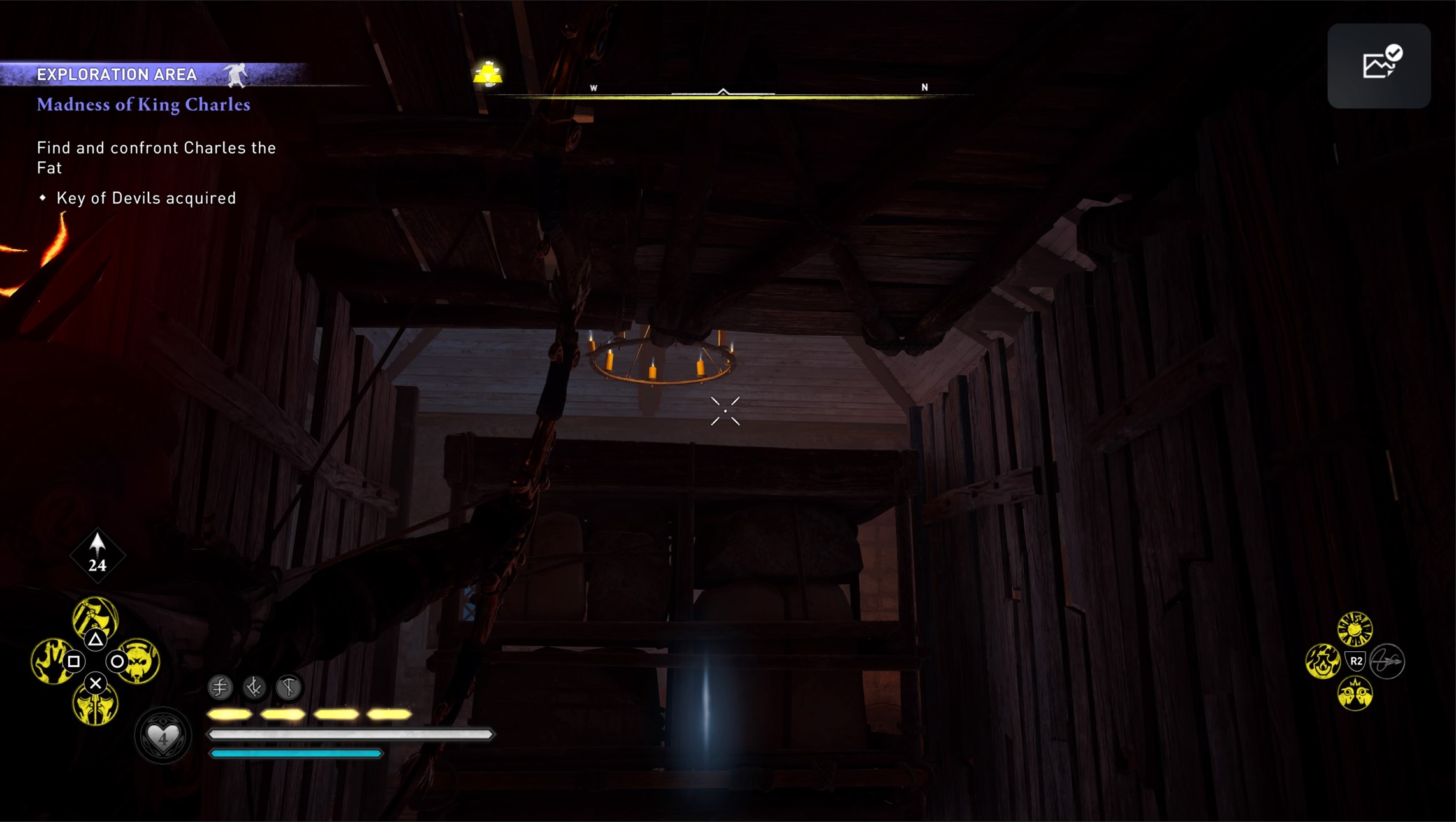 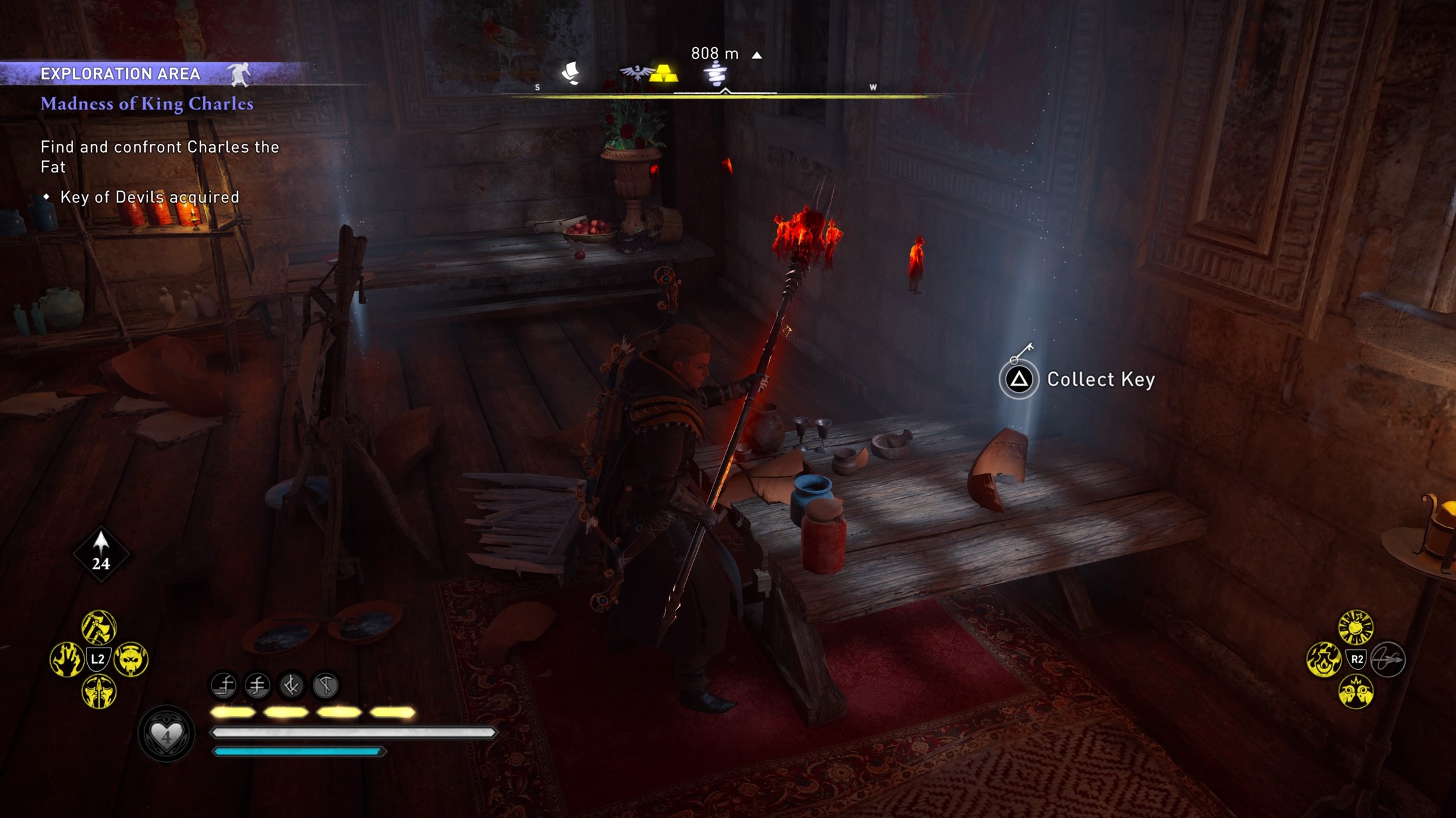 Next, go around the back of the upper level and unlock the altar room past the hiding peasant man. 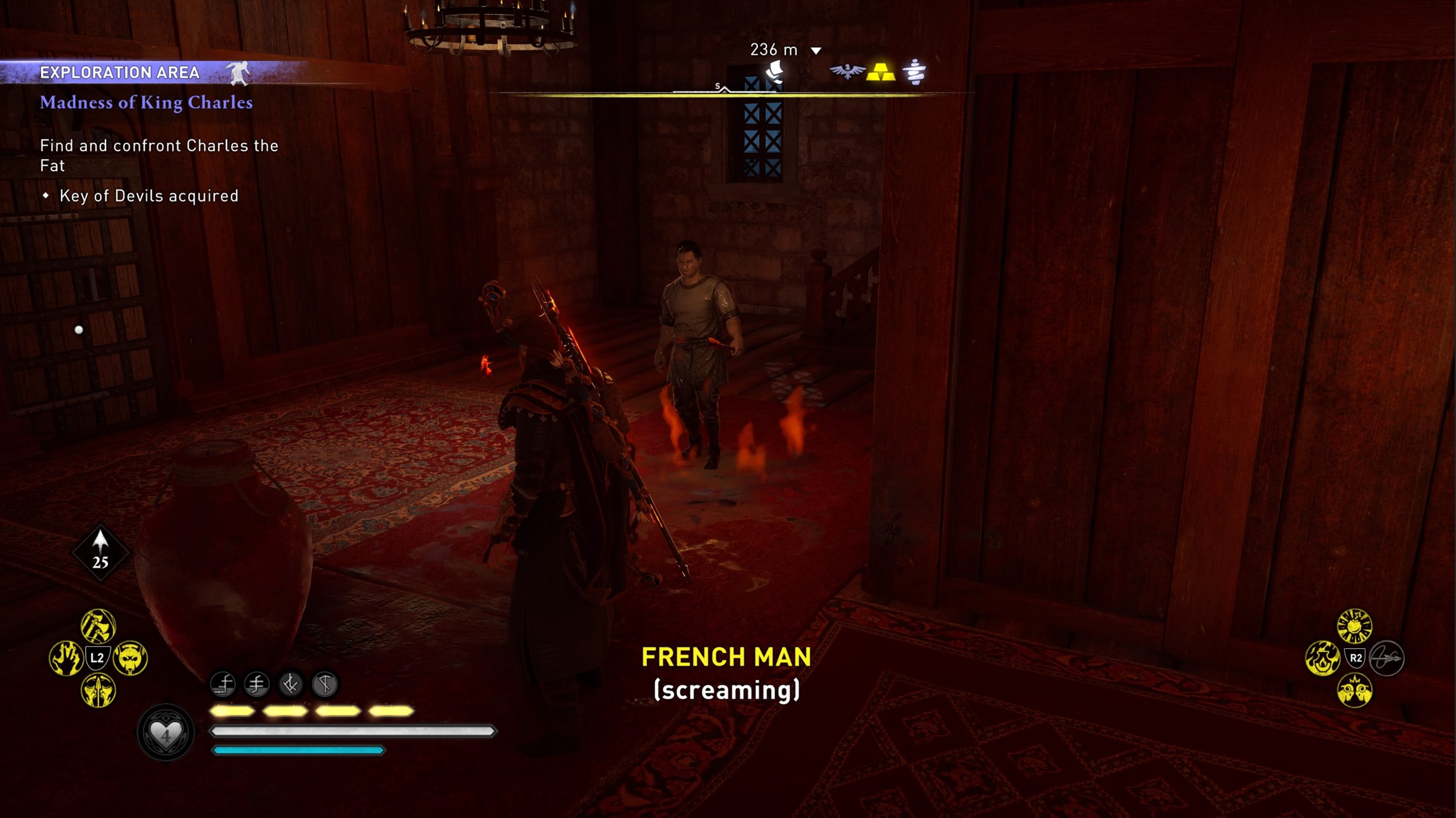 Go over to the left to search the king’s room if you wish, then take the angel key from the altar room on the right. 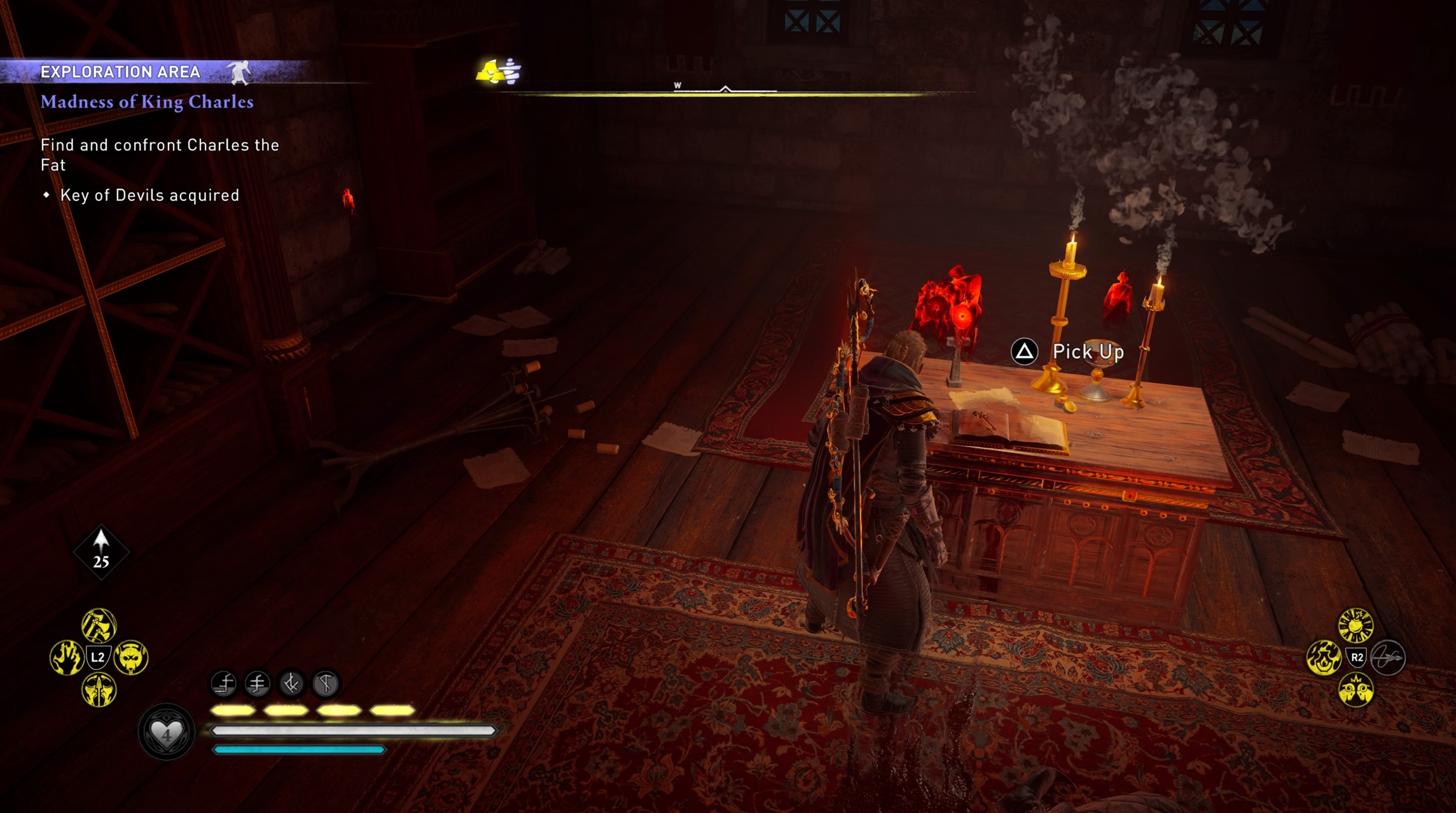 With that, open the door in the main chamber and enter the boss fight.

If you want to install Count Odo on the throne, your task here is much simpler: just deplete Charles’ health bar as normal by throwing him into the flaming braziers. 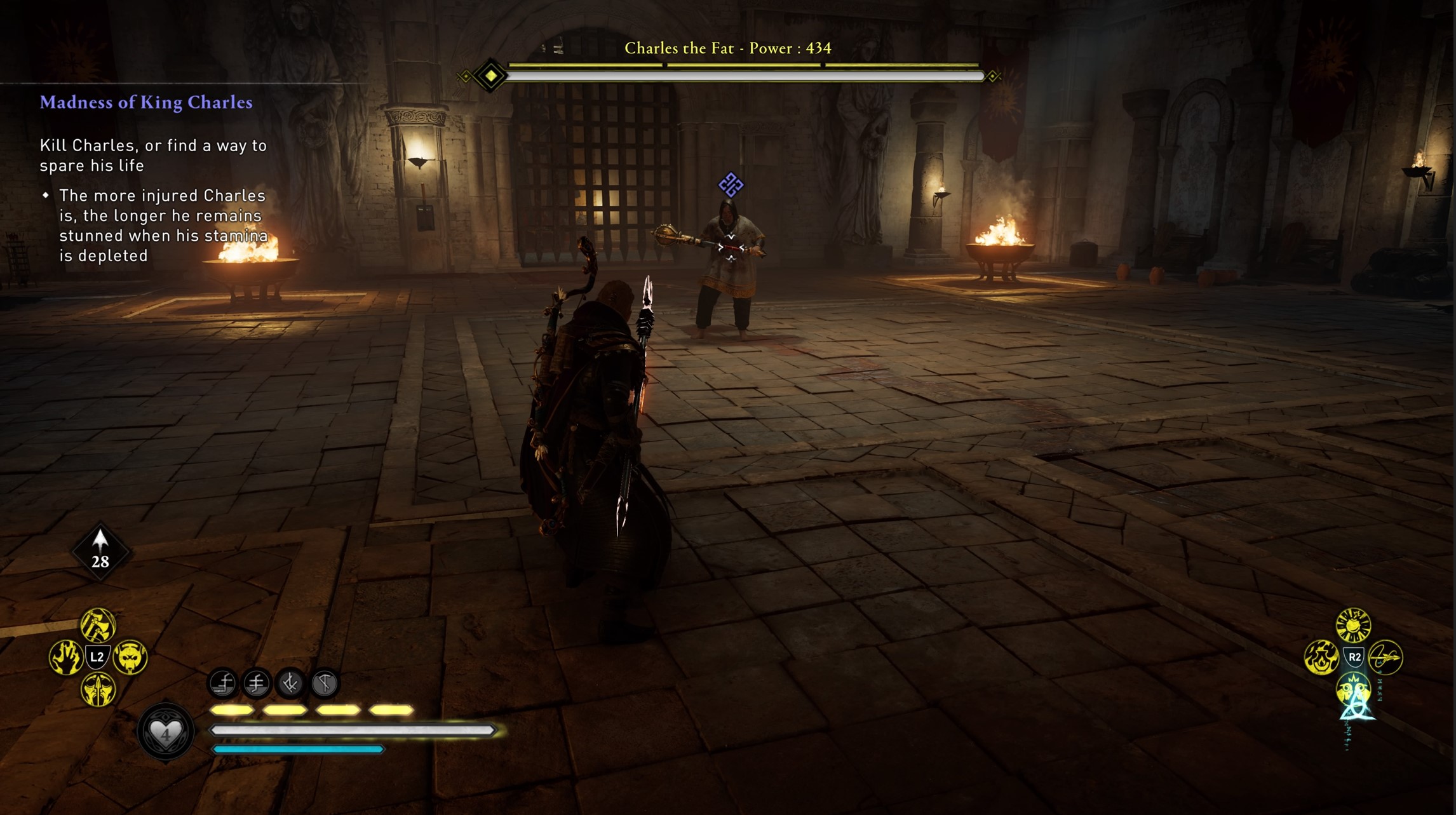 When he puts them out by throwing mud, you can relight them with a torch or flaming arrow.

But to spare Charles’ life, you need to open the lever at the back of the room, and then trap him inside the shrine. 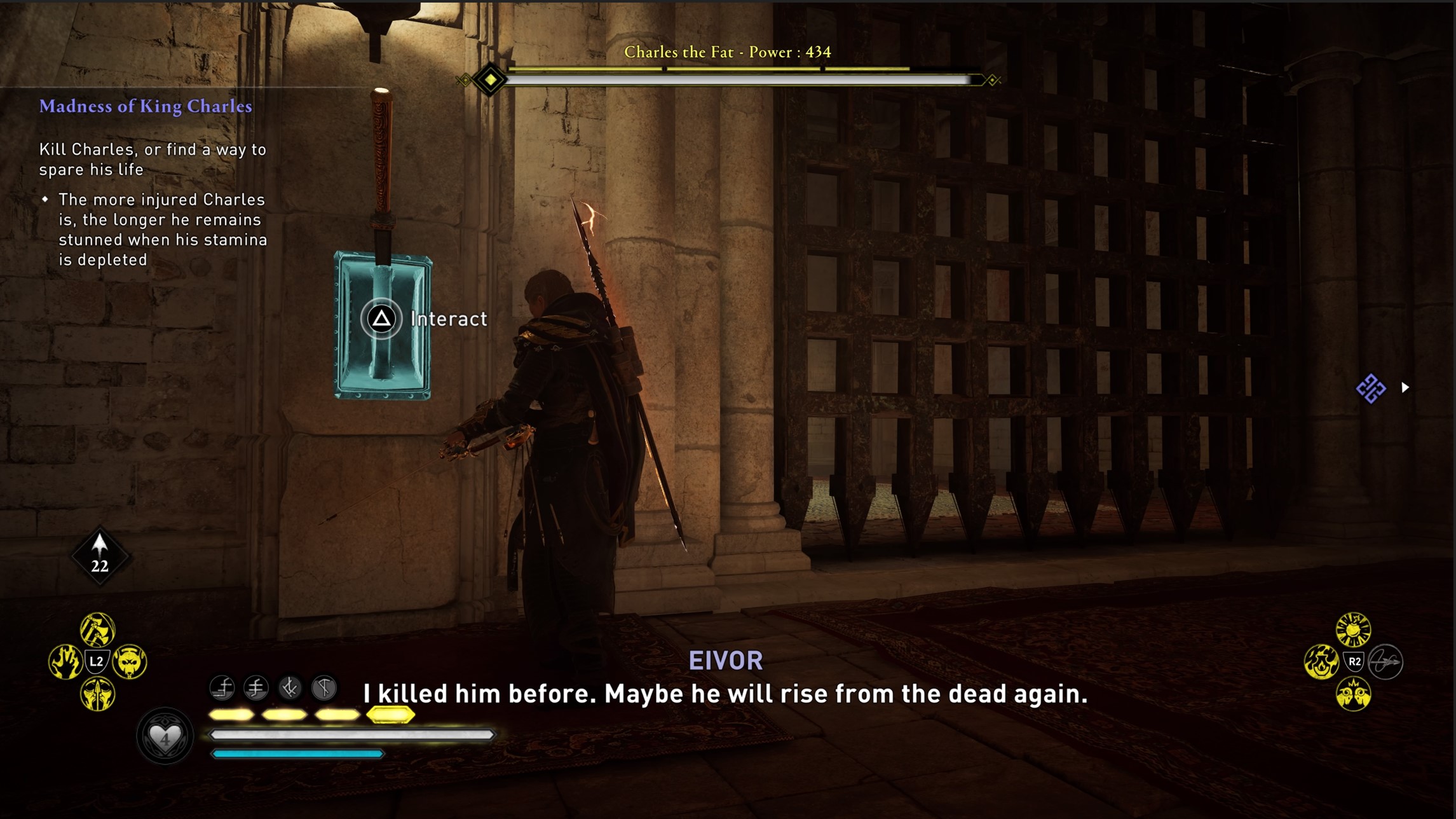 However, you need to injure him first, but just enough that he’ll be stunned for long enough when you deplete his stamina by blocking his attacks.

To weaken him enough, drain his stamina by blocking his regular attacks, then press R3 to push him towards one of the six braziers. You need to throw Charles into 2 braziers before you trap him if you want to spare his life. 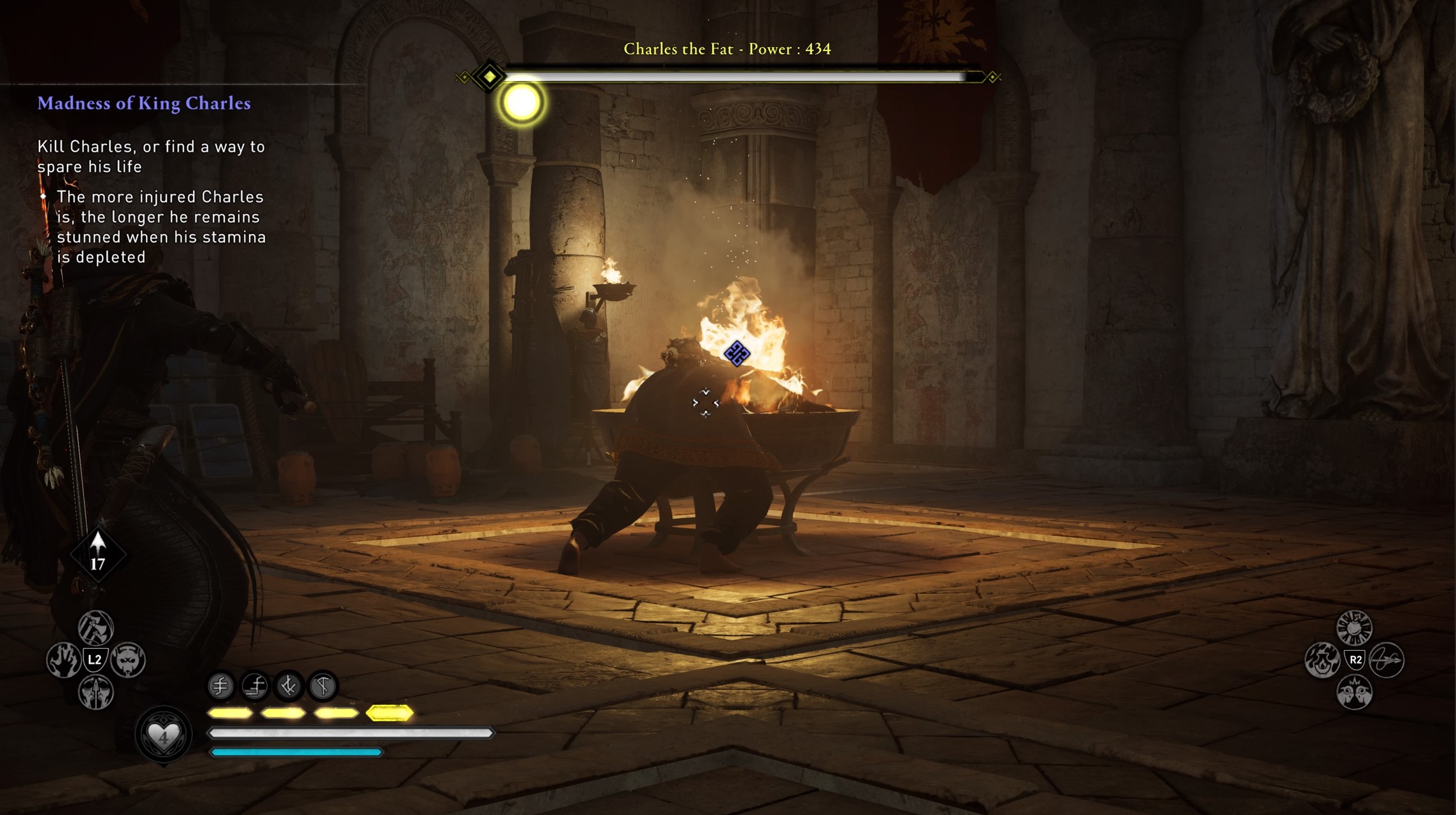 When he puts out the fires by flinging mud, as we said before, you can relight them with a torch or flaming arrow.

Once you lock him in the shrine room, you’ll have committed to sparing his life and taking that ending, so make your decision during the fight. 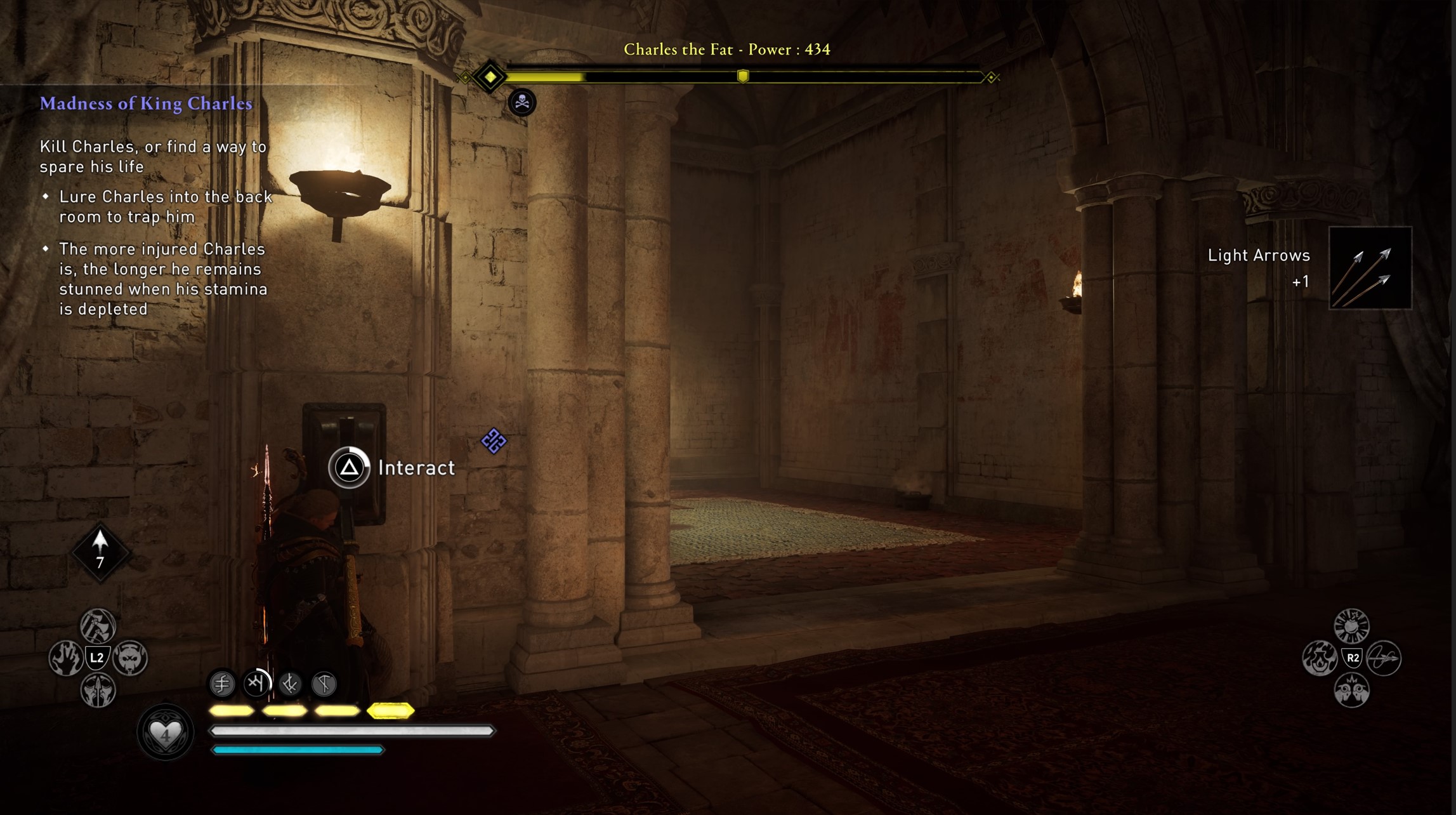 Now we’re into spoiler territory, at the real crux of the Siege of Paris DLC’s story.

Whichever path you choose, the main victory is pitched as gaining a firm ally in Toka, and that only time will tell if Frankish forces will ever invade England.

If you feel strongly either way, you should pick that ending, rather than worry about missing a particularly ‘good’ ending.

While Assassin’s Creed stars figures from history, it’s mostly inspired by historical events rather than following them to the letter. If mirroring what happened in real life matters to you, Charles the Fat did stay in power following the Siege of Paris, but his appeasement of the Viking Invaders was extremely unpopular.

Charles eventually failed to have his son Bernard succeed him as king, and on his death, Odo was elected leader of the Franks.

However, in-game, things are pitched a bit differently. 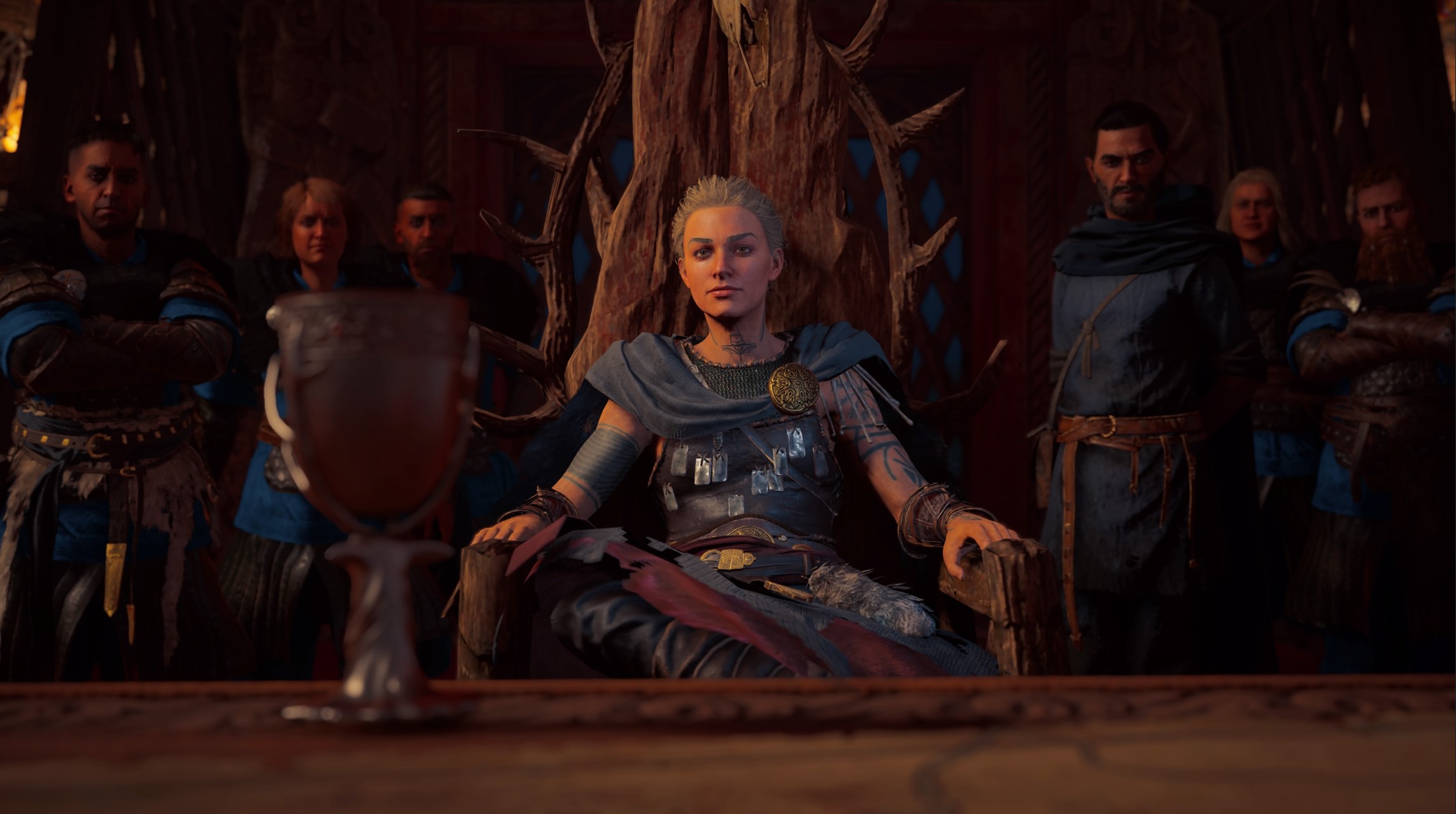 If you spare Charles the Fat:

If you kill Charles the Fat:

The scenes that play are largely the same, so really, you’re deciding on whether you prefer Odo or Charles, Richardis, and Bernard.

Once you’re done with the main DLC story, there’s plenty more to enjoy. Here’s how to complete the Hidden quest at Roman Excavations.

Or if it’s more boss fights you’re after, here’s where to find the Frankish Nobles.

The post Assassin’s Creed Valhalla Siege of Paris Best Ending | Should you kill or spare Charles the Fat? appeared first on VG247.